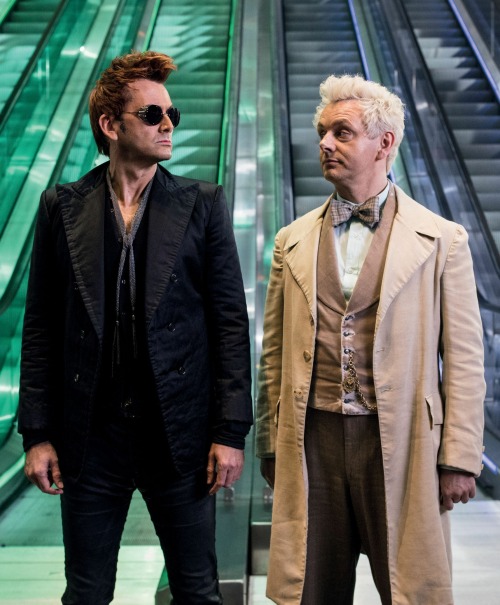 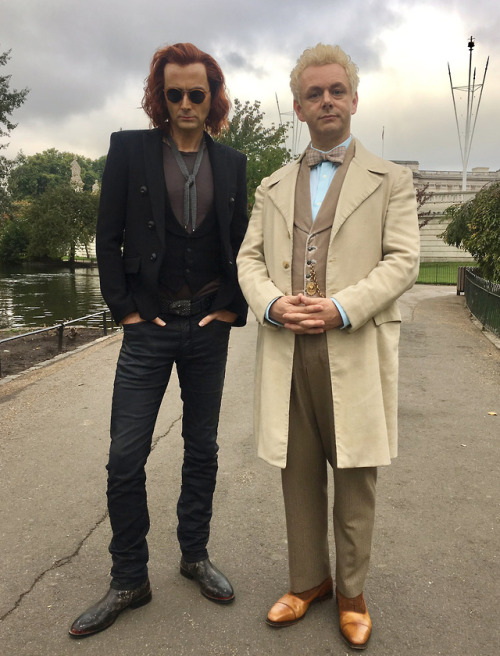 [ Film School Rejects – by Ciara Wardlow]
“I worked through it with gut reaction images. So, two guys. Two guys, kind of close, nearly in love, if you like,” she said. “I just went in and we had a really big, very open conversation about how you related to these people in the script and how we would make them real and plausible, but give them a fantasy element. Give them something otherworldly.”

While Anderson says that she ultimately took this approach with more or less all of the characters, mixing period and modern elements to give characters somewhat timeless, yet also somewhat fantastical “out of time” looks, in the early discussion stages it was all about Aziraphale and Crowley. For one thing, Sheen and Tennant were already cast, which was a major help in determining their looks. It took some time to settle on the duo’s main, contemporary looks, but once these were locked in they played a significant role in determining everything else they wore.

[…] Aziraphale maintains a look with significant nods to the late Victorian era. Crowley too, although he manages to put an edgier twist on things than his angelic contemporary. “We re-appropriate bits of period stuff so that it echoes. [Aziraphale and Crowley] echo one another in their visual identity with pieces from their past—where they’ve touched each other in the past perhaps, or bumped into each other.” Regarding how Crowley manages to keep more of a modern, cool vibe, Anderson gives David Tennant’s performance the lion’s share of the credit. “He’s a very nice man, but he’s very sexy. He brought all of that swagger, that rock star, snake-hipped sexiness, and we built on that.”

[ SyFy Wire – by Jennifer Vineyard]
GARDEN OF EDEN, 4004 B.C. –  Anderson looked at everything from Pre-Raphaelite paintings to Al Pacino’s hippie clothes in Serpico to determine just the right flow for Aziraphale’s rough-hewn robe, which has gold embroidery on the shoulders and side. Aziraphale is also wearing a golden ring, which later becomes a signet ring stamped with wings in the Victorian era.

NOAH’S ARK, MESOPOTAMIA, 3004 B.C. – “As aged as I am, I wasn’t there,” Anderson says, laughing. “And there wasn’t any painting or documentation from this era. But what we do know is that tunics remained pretty simple, and the earlier shape would have served them well for many years.” Aziraphale’s robe becomes more streamlined, and he wears gold beads at the neck.

THE CRUCIFIXION, GOLGOTHA, 33 – By this time, both Aziraphale and Crawley — now Crowley — are wearing turbans and head wraps, which Anderson attributes to “a bit of vanity.” Plus the wrap helps Crowley conceal his snake-like eyes (it’s too soon for glasses). Aziraphale dons a soft leather coat over his tunic, while Crowley wears female attire of the region — an abaya.

ROME, 41 –  Switching from tunics to togas was difficult, since togas contain 6 to 12 meters of fabric, which is a lot to carry around on camera. Anderson reduced the size by cutting the togas to fit for the character’s movements, and she gave each actor a thematic decorative pin to hold their togas together — Crowley a serpent and staff, Aziraphale a pair of wings (both courtesy of George Easton at Danegeld Historic Jewellery). Although history might argue that it’s too soon for sunglasses, Crowley starts to shield his eyes with a very small, eye-shaped lens. “It’s suggestive, rather than historically accurate,” Anderson says. And as a sign that Crowley is adapting to the humans around him, he also wears a silver laurel wreath.

ARTHURIAN ENGLAND, THE KINGDOM OF WESSEX, 537 – Anderson sent character descriptions and visuals for Aziraphale and Crowley to armor specialist FBFX, which sent a van to London full of pieces that could work for angelic and demonic armor. Instead of focusing on historical accuracy, Anderson looked for shapes and fit that suggested an ethereal — or snakelike — quality, once the pieces had been painted black or silver. For Crowley, she found a helmet that had a smaller face that could suggest a snakehead, and for Aziraphale, shoulder pieces that were slightly wing-like. To add to the wing effect, Anderson added a white fur caplet to Aziraphale’s armor. “It was terribly grand, but not very practical,” she says. “And the poor guys, it was murderously uncomfortable to stand around in that armor.”

GLOBE THEATRE, LONDON, 1601 – Crowley and Aziraphale catch an early version of Hamlet, looking more period-appropriate than ever thanks to the Globe’s vast archive of costumes. Aziraphale’s wardrobe, which includes a neck ruff edged with gold thread, has a metallic look with a hint of iridescent blue, which opens up his color palette. Crowley, meanwhile, wears a cleaner neckline and leather on his doublet, as well as fabrics that provide sheen and luster to suggest his snaky origins.

REVOLUTIONARY FRANCE, PARIS, 1793 – This is not a period to be dressed like an aristocrat, but Aziraphale couldn’t resist a lace collar, gold brocade and fitted jacket — which explains why he’s stuck in a prison cell (at least until Crowley intervenes). Crowley, more mindful of what revolutionaries would wear, dons a dark red jacket that’s almost as dark as his usual black. When Aziraphale miracle-changes his clothes, he wears the red cap of liberty. “It’s a soft beret that falls somewhere between a modern French beret and a pirate headdress,” Anderson notes.

ST. JAMES’ PARK, LONDON, 1862 – This is the time period with which Aziraphale gets most comfortable, fashion-wise, and settles into a Victorian look with tartan flair. Anderson also bestowed some heavenly nods to his angelic nature — a feathery velvet top hat, a stopwatch with angel’s wings on the chain, and the signet ring. Crowley, meanwhile, wears a pair of long, elegantly cut trousers that we will see again in the 1960s. “The trousers repeat, which is basically what fashion does anyway,” Anderson says. “And it’s what the story does. There are notes backward and forwards.”

THE BLITZ, LONDON, 1941 – Aziraphale’s tartan necktie becomes a bow tie, and his penchant for wide lapels, a nod to his wings, continues, this time with a spear-point collar. Crowley, who comes to save Aziraphale once again, is dressed more formally, in a full double-breasted wool suit that must have been hard for David Tennant to wear in the South African heat. “The rest of the crew were in flip-flops and T-shirts, and David was in the suit, hat, and those big boots,” Anderson says, recalling the shoot.  “He had to be very physically active in that scene, and yet David didn’t complain about the heat or anything. He’s amazing.”

SOHO, LONDON, 1967 – Crowley, as noted, continues to wear his Victorian trousers, which are right up to date, and which he pairs with a black paisley velvet jacket with contrasting lapels. His sunglasses now have more of a John Lennon vibe. Aziraphale, perhaps inadvertently, is also looking stylish with his Victorian topcoat, spear-point collar, and cravat (modified from his scarf in Victorian England). “You can’t avoid being affected by changing trends,” Anderson says. “However bookish you are, you still notice other people. And you would have had Rolling Stones and Beatles fans wearing that kind of thing. That was our argument for Aziraphale wearing his Victorian topcoat all the way through, and Michael Sheen loved it. He said it inspired him. And the cravat rang in the changes and helped us with the passage of time, rather than always having him wear a bow tie.