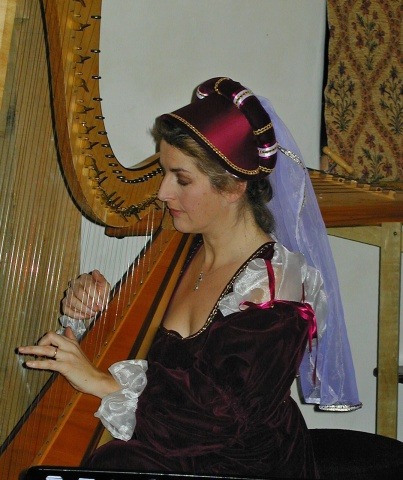 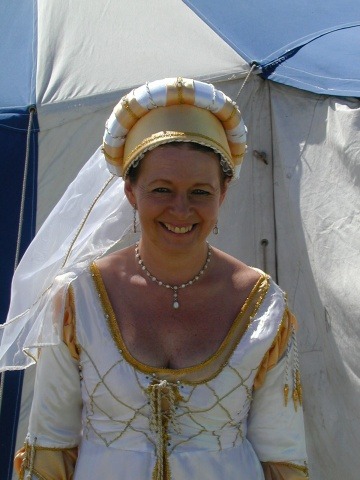 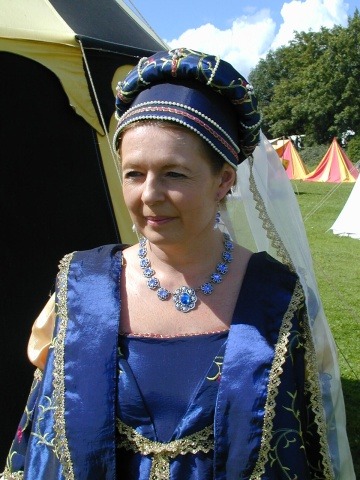 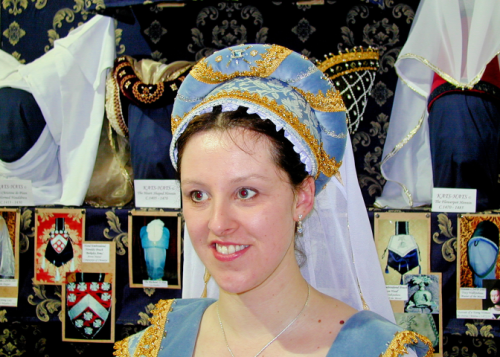 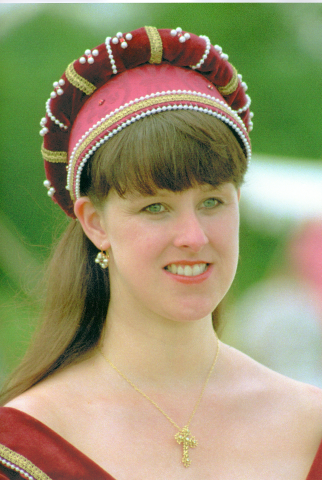 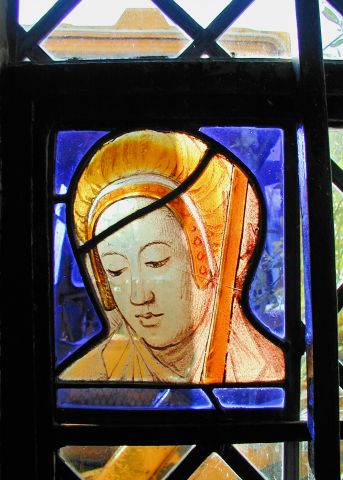 This style of headdress, sometimes also called a Hennin or a “Steuchein,” started with Flemish women who wore close fitting caps called “Hauben,” over which a “Roundlet” or “Wulsthauben” is worn at the back of the head, unlike the original horizontal arrangement of the previous century, to give it a “Turban Effect.”
The turban effect came into vogue after the fall of Constantinople in 1453. Roundlets were stuffed and padded with Tow or Horsehair, covered in brilliant coloured fabrics “Gold Tissue” and heavily jewelled. Veils were worn with the Flemish Hood “falling gracefully down the back” as well as sometimes being arranged to fall over the forehead and to the eyes, tied tightly over the whole Headdress or even worn without a veil at all.
The Flemish Hood was worn by all levels of society, from High ranking Nobles to the Lower classes. Most representations of this headdress in England and France can be found in paintings (by Dürer) and tapestries by Flemish artists. One such tapestry is at Hardwick Hall, Derbyshire and another is of an image of a Lady in a Flemish Hood which can be seen in stained glass window at Weycroft Manor, a Tudor House near Axminster, North Devon.
The Flemish Hood was worn throughout Flanders, Germany, The Netherlands, England (adopted occasionally), France and Italy where the Headdress was enlarged and deformed in such a way only the Italians, who were the forerunners in Fashion (Closely followed by France), would do and still be considered “Stylish.” These Italian Hoods became so exaggerated and bulbous until becoming very much enlarged at the back of the head. A contempory quote says “No amount of Decoration could make it becoming.”
In The Netherlands natural hair would be “wound round the head” over the Cap instead of the Jewelled Roundlet. This style was favoured by young girls and young women from both Upper and Lower classes.
German women, unlike other women of Western Europe, allowed their coiled or ringleted hair to show at the sides of their version of the Flemish Hood, Caps or other fashionable headwear.
The Lower classes covered their Caps and Roundlets in coarse linen.
From 1510 onwards the Flemish Hood was still worn alongside the Famous Gable Hood, but other Tudor styles of headwear became dominant throughout Europe, and the Flemish Hood was slowly phased out.
(source)