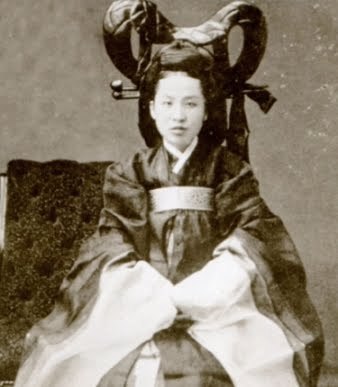 Often, Korean women of the Joseon era used wigs to make their hair much fuller. As you can imagine, they were heavy and very expensive. (It took human hair to make the wigs, and most people refused to cut their hair.) Because of that, there was a royal order in the mid-Joseon era prohibiting the use of wigs, as they were deemed to be promoting wasteful spending as well as neck injury: a tteoguji made of human hair were said to be so heavy that women used to faint because of its weight. Even today, Joseon-era wigs are a significant enough burden for actresses who star in historical dramas such that some directors elect not to use the wigs although the drama might become historically inaccurate. After this prohibition, the tteoguji was made with wood carved and painted in black in order to make it resemble human hair. Apparently the wooden addition was actually lighter than the addition made with human hair.