Haec-Vir (Latin: This [effeminate] Man – haec being the… 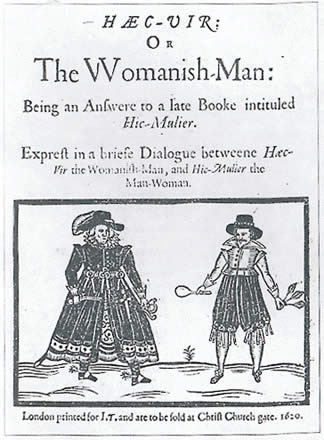 Haec-Vir (Latin: This [effeminate] Man – haec being the feminine form of the demonstrative pronoun jokingly applied to the masculine noun) was a pamphlet published in 1620 in England in response to the pamphlet Hic Mulier. Where Hic Mulier argued against cross-dressing, and more broadly women’s rights, Haec-Vir defended those women who did not fit their expected gender role. The pamphlet is designed as a dialogue between Hic Mulier (The Man-Woman, a female transvestite) and Haec-Vir (The Womanish Man, an effeminate man).