Gmail being the most common web mail service available has been used by almost all web users since its existence. The repeated usage of this email service has not only resulted in its excessive popularity but also making it vulnerable to a number of issues like; server downtime, unavailability, hacking of account for stealing of identity or confidential data misuse, and more. There are many options that we, as end users, have implemented to ensure the security of our emails and private data available on the account. However, the failure at protecting data is still surface in spite of the efforts consistently being taken. Here we will discuss the various methods, we have implemented as users and yet faced at protected our own data available on web servers. Moreover, the post does not end there and continues to suggest a reliable method for Gmail message security. 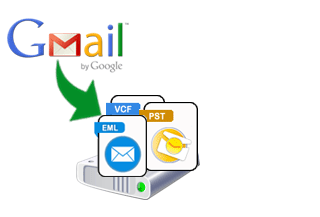 Gmail being in excessive use also becomes the soft target of many with suspicious intentions. However, technology being nothing new to the current race of users is adopted in many forms by the Gmail users to shield themselves from such attacks. Though the methods are not foolproof and do not completely stop the data vulnerability. Nevertheless, many of us have tried implemented the following methods as part of protecting our web based data storage.

When security is the concern, the first thing that comes to any user’s mind is – Password. Following are some of the attempts made by users in order to protect their data.

2. Alternative Change in Password: Another alternative that users adopt is of alternatively changing their account credential, i.e. password. The account password is in control of the user, if nothing. Thus, you can easily change the password every now and then but it is usually considered a tiresome method and not so dependable too.

3. Employing Two-Step Verification: Google announced two-step verification back in 2010. People have been saving themselves and their account data from being hacked or coming under control of unauthorized users. However, this procedure itself becomes quite difficult to follow-up when making repeated logins.

When despite all the efforts, your failure at securing the data is surfaced; it is usually in the following forms:

1. Account Inaccessibility: Users are surfaced with issues in accessing their own account. The inability is encountered in the case where your account is hacked, i.e. in control of an anonymous and unauthorized user by illegitimate means. This clearly means that any/all data available on the account is under threat.

2. Data Misuse/Missing: The crucial data you kept or shared using your Gmail account is now missing or misused, which is commonly the case of intellectual property theft. This also puts web-based storage under threat making it an unreliable place for storing or sharing such confidential data/information.

The most common and reliable method suggested by experts is backup. Backup seems like a very trivial term but has huge advantages over data protection and business continuity. Thus, backup gradually became a trend amongst web-based email service users as part of protecting their data without any inconvenience or compromises surfaced.

Whilst there are plenty of methods, the only one reliable enough to be suggested undoubtedly is a commercial program. Commercial utilities not only save the trouble and end user effort but are also extremely customizable making it easier as well as safe for backup purposes. https://www.apsense.com/article/know-why-and-how-to-backup-gmail-inbox-gmail-backup-solution.html

Otherwise backups can be created in any manner such as copying the data to document files, or downloading them as local email repositories, and so on. However, they can only be adopted for backing up countable number of data and not when wanting to generate bulk data backup.

A secure methodology to backup Gmail messages included within Gmail Backup tool can be experienced in many forms such as:

Author Bio: The author has an expertise at writing about backup related issues and solutions. Gmail Backup is one of the most talked about topic in the industry which the author has discussed in several posts with different point of views over the matter.